Parenting and Lifestyle Blog Ireland – The Chaos of 3

A Parenting Blog About Me, the Three and He!!

Accepting an offer to do a book review on the newly released novel Ginny Moon, I realise that the main topic, Autism, is one that I have very limited knowledge of. I had no idea what to expect and I worried that maybe I wouldn’t follow the story, after all, this novel was based on a subject that never really touched my world and so perhaps I wouldn’t connect with it.

How very much unfounded those worries were.

Reading a little about Benjamin Ludwig I found that the story of Ginny was based on his time being a foster parent and later adopting a teenager with autism. Knowing the book was based on that real experience in his life made reading it all the richer. 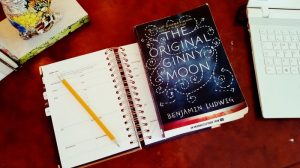 Written in diary form with dates and exact time frames, the story is told by Ginny herself.  This is a very easy novel to sink into and it flows beautifully. Ginny had a rough start in her life and having been removed from her mothers care, she entered the foster system. Finally finding a safe space with her Forever Parents, Ginny seems to have a solid base and a secure feeling of a home and yet she is still very tied to her early life. There is something back there in her past, in her mother’s old apartment that she cannot move on from. We don’t know for sure if this is a real living thing she yearns for or just a possession, something that maybe her Forever Dad could replace for her. It’s very clear that to Ginny, there is no replacement, she needs this precious thing she left and it’s under that bed, back in that apartment, a place that could be very dangerous for her to return to. Ginny needs to get back to her Baby Doll.

Not deterred by the adults in her life, Ginny plots a way for her birth mother to kidnap her. This is a plan that makes the most sense to Ginny but to her frustration it only leaves her further from where she wants to be. Ginny’s every moment becomes a crusade to get to her mother and find out for once if her precious baby doll is safe.

So many things about Ginny’s character made me really feel for her and even though, as a reader, you know that she came from a life of neglect and abuse at the hands of her mother’s array of dark and mean boyfriends, you become really invested in seeing Ginny get the closure she needs. You want so much for her to have the peace of mind of knowing her baby doll has been well looked after in her absence because it is the single most important thing in her life.

You will also feel very deeply sympathetic towards Ginny’s foster parents, Maura and Brian. When they first welcomed Ginny into their lives they were wholly focused on giving her a safe and loving home, they were prepared for all her unusual little ways and needs, like how she must have exactly nine grapes for breakfast and her wild obsession with Michael Jackson! They were prepared to guide her through any issues she may be struggling with as a result of her Autism and they were equipped for any incidences that may occur, such as trouble in school and Ginny’s impulsive nature. But then there was a change in their lives, they welcomed a baby into their family and the instinctive maternal mother bear side of Maura came roaring to the surface. She was clearly petrified to leave Ginny alone with the baby, she was so worried about what Ginny may do. Would Ginny freak out of the baby was crying? Why was Ginny so intent on feeding the baby when Maura was doing it by breastfeeding? Would Ginny try to hide the baby the way she says she hid her baby doll in a suitcase under the bed? All of this fear begins to drive a wedge between Ginny and her Forever Mom and it’s both easy to see how it happened but also very sad. Brian on the other hand, really steps up. He remains as committed and loyal to looking after Ginny as ever and he clearly loves her. He’s doing his best but it’s a stressful time and the stress is taking it’s toll on his health. You can see his heartbreak as things at home become more intense and his wife is staying locked away with her baby in her bedroom while Ginny, whom he calls his Forever girl, is busy luring her unreliable and unsafe mother back to her life.

I could go on and on talking about this story and this journey that Ginny is on but I would much rather spend the time telling you that this is a wonderful book, it is such a compelling story and the insight it gives you into the mind of someone with Autism is remarkable. For the author, who does not have Autism, to be able to get so deeply get inside the brain of a young Autistic girl and explain her world and her thoughts the way Benjamin Ludwig has, it is a piece of art.

If you’re a parent you should read this book. If you are a teacher or if you have someone in your life with Autism you need to read this book. It’s not a medical journal; it’s not a teaching aid. What this book is however, is a window into a world you really need to know about. After you read it you will see so many lessons that Ginny Moon has thought you that apply to children across the board, not just those with Autism.  For me personally, my favourite thing to take from it is the idea of asking too much of a child. The simplest thing of asking one clear question and allowing them to answer makes sense to me now. If you asked Ginny a question followed by another question then she remains quiet, you’ve asked too much when one question would have been enough. I can easily see how that practice would benefit us all in dealing with children, give them time to think and process and present their answer. Give them stability and a sense of safety in an environment they know they can trust and rely on and give them the space to be who they are.

Ginny Moon was released on June 1st and is available online and in all good bookshops; it is a story you will be so drawn to and so invested in and the brilliant, clever Ginny will stay with you for a long time after.

I was presented with an advance copy of this novel for the purpose of review, all opinions are my own.

Sabrina is an Irish Parenting and Lifestyle blogger who writes about every day life as a mum of three. She never gets on top of the laundry and her bed is usually unmade but she's laughing every day, smiling and doing her best!! On The Chaos Of 3 blog, you might find a few rants, a few stories of adventure; you'll definitely hear about days' out and places to visit and very occasionally you'll spot something new to cook for dinner! Reviews pop up now and again, they are unpaid posts and are really just the gang taking up a nice invitation or reading a new book in return for an honest report. Stick around, read and say hello and if you would like to work with us just pop an email off and we'll figure it out! x